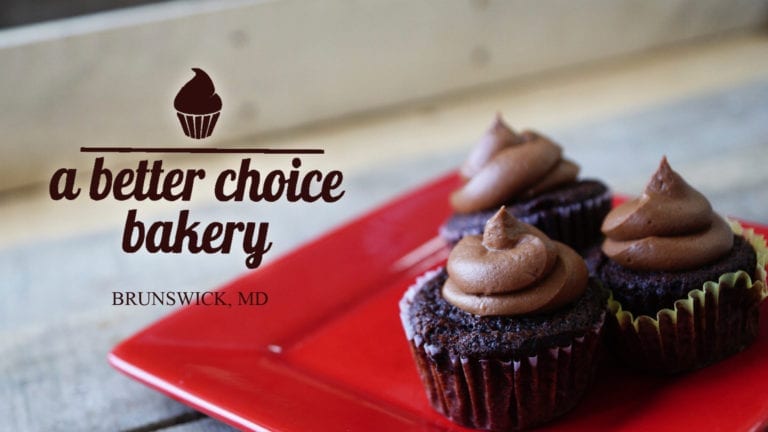 Beth Johnson bakes for love, she bakes for a living, and she will bake for you — no matter what your dietary restrictions are.

Beth is the sole owner, baker, packer, and delivery person for A Better Choice Bakery in Brunswick, Maryland, where she makes gluten-free, dairy-fee baked goods.
With an arsenal of alternative ingredients like rice, tapioca and potato starch flours, coconut milk, soy and soy-free dairy substitutes, Beth Johnson is hell-bent on creating scrumptious baked goods for folks who cannot or choose not to have wheat and dairy. With a loving heart, gritty humor, and a whole lot of hard work, Beth is determined to make the best brownie you have ever had.
Beth’s foray into gluten and dairy free baking began with her son, Hunter. “He was a miserable baby, stuck in an eat-scream-sleep cycle.” When he was two years old, Hunter seemed unable to hear Beth when she called his name, despite having normal hearing test results. Removing the dairy from his diet yielded immediate results. Hunter could hear and respond to his mom when she spoke to him. Around this time, Hunter was diagnosed with autism spectrum disorder (ASD).
Tracking down gluten (a protein found in wheat and other related grains) as another allergen for Hunter took longer. This was, in part, because food labeling laws did not require gluten to be listed on packaged foods as a possible allergen until 2004. When Beth removed gluten from Hunter’s diet, his behavior, again, changed for the better.
According to one theory, some people with ASD incompletely digest wheat and dairy products. Incompletely digested proteins from these foods are then absorbed into the body and bind to opiate receptors, altering behavior, auditory and speech integration, and other physiological reactions.
Armed with this information, Beth began to bake. She took recipes from her childhood favorites; she substituted and converted, modified and tweaked. What she ended up with was enough to start selling baked goods at farmers markets in 2007, and enough interest in her products to open a bakery in 2011. Most recipes are originals; others are inspired by books like Vegan Cupcakes Take Over the World by Isa Chandra Moskowitz and Terry Hope Romero.
Gluten and dairy are not the only allergens Beth can accommodate. “I am not going to turn anybody down,” she says. “If someone has a nut allergy, I have a dedicated nut-free room. If they are allergic to nightshades*, I use tapioca starch instead of potato.” She can do soy-free, GMO-free, corn-free—whatever the need, she will figure out a way to meet it.
Providing this kind of individualized service is hard work. Beth is no stranger to hard work and challenges. She has faced two divorces, the loss of her home and car, not to mention the challenges of caring for an autistic son and running a business, and she has somehow preserved her sense of humor. Holding six part-time jobs in addition to running the bakery, she is the picture of fierce maternal determination.
Some of her greatest loves and struggles are commemorated on her skin in ink. “All of my tattoos mean something,” she says. Her first tattoo was a puzzle piece with wings representing her autistic son. “When I got it, I wanted people to see it and ask me about it. I want to talk about him.”
Beth delights in the joy her baked goods bring to people, some of whom have not had bread, a donut, or a really good brownie in years, or ever. Her most rewarding job so far was baking for the birthday party of six-year-old triplets who had never had cupcakes before because of the severity of their nut allergies.
The hardest aspect of the business she says has nothing to do with making the food. Her biggest challenge is getting her baked goods in front of the right people. She says that people tend to judge gluten free and vegan before they taste it. She is proud of the fact that her brownies won second prize in a community show, and she did not tell the judges there was anything “different” about her entry.
Beth says her vision is “to become the Starbucks of gluten-free, dairy-free baked goods.” She wants to be everywhere and to reach everybody. She wants everyone to have access to the quality she provides, and to be able to trust ingredients labels. Beth wants people to know “food allergies are not that hard anymore. You just have to know where to look. That and stick with Indy businesses!” She trusts success will come if she keeps at it.
She dreams big, and it would be wise not to underestimate this woman.
-Zoe Brittain