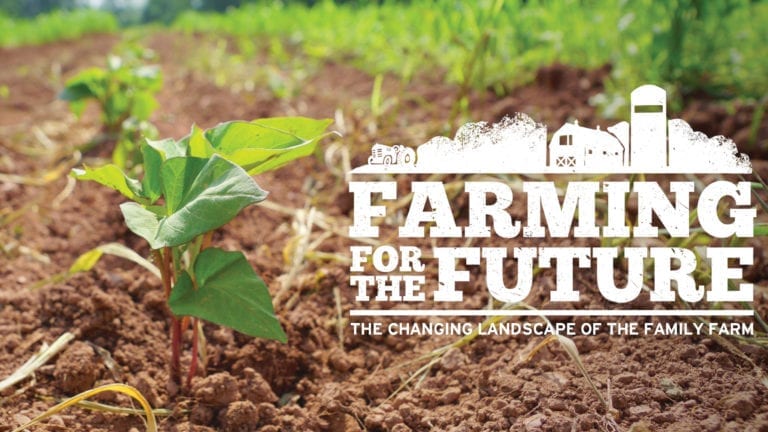 The Changing Landscape of the Family Farm

“We have an aging farming population. If left unchecked, this could threaten our ability to produce the food we need – and also result in the loss of tens of thousands of acres of working lands that we rely on to clean our air and water.”
-Tom Vilsack – Secretary of Agriculture
Once upon a time, everyone was a farmer. Everyone had a garden to produce food for self and family. Most people had livestock and so grew grain and hay to feed to those animals. Farming, once upon a time, was not a career but a way of life. Today, only two percent of the population produces the food, including fruits, vegetables, meats, and dairy, that feeds our nation.
Once upon a time, the assumption was that at least one child of a farmer would take over the family farm. Farmland stayed in families for generations, handed down along with intimate knowledge of the land—its attributes, challenges, and, sometimes, its potential. This paradigm is no longer a given.
It is no secret that our nation’s farmers are aging. The average age of a farmer today in America is 57 years of age. Five years ago it was 55. We have had an increase of 30% of the farmers over the age of 75 and a decrease in the number of farmers under the age of 25 by 20%. Our farmers are aging, and there are not sufficient numbers of young people choosing to farm to replace them.
From where will the next generation of farmers come? What is pushing young people away from farming, and what can lure them back?
Over a series of articles appearing in future issues of Spoonful, we will hear from a variety of farming families whose situations run the gamut of choices – offspring who have chosen to take on the family business, those who have not, those who are too young yet to decide, and those who have not come from a farming background but have elected to pursue farming as a career.

Summer Creek Farm
At 55 years old, Rick Hood is still a strapping, energetic man. Rick is the principal operator of Summer Creek Farm, a 34-acre certified organic farm in Thurmont, Maryland. The farm produces vegetables, herbs, free range eggs, honey, grains, and a range of soil mixes.
Rick has two grown sons who have chosen not to go into the family farm business. Rick says this is largely a matter of income — they can make more money working fewer hours off the farm.
Rick says that the opportunities off the farm make it difficult for people stay farming. Jim Rogers, well known in the business community for his tremendous success in commodities investing, predicts the price of food will have to go up in order to attract young people to farming.
“It is not an income level that young people are going to seek out,” Rick says. “Both of my sons have opportunities to make significantly more money in other areas. I have two bright boys with good jobs and they just don’t have the desire [to farm]. My younger son is a mechanic now and is making decent money. I will say that his mechanical skills he got from growing up on the farm. He was hired by a person that wanted someone who came up on a farm because they have intuitively good mechanical knowledge. And, they justknow how to work.”
There is also the high cost of set up, and the capital required. For a young person to start farming, the costs are prohibitive.
“For just our small farm,” Rick says, “we have over three hundred thousand dollars’ worth of equipment, the price of the land, and the cost of everything else going into it. The cost for a young farmer to start up is significant.” And, that cost is rising as the technology evolves in farming because the technology itself is expensive.

Winding Road to Farming
Rick was a robotics engineer before he was farming full-time. He, too, could have made more money in fewer hours. Why did Rick decide to farm instead of pursuing a more lucrative career?
“There were family issues that were a factor. My family had always been farmers. My dad left the farm [to teach] and he always wanted to go back to the farm. Part of me going back to the farm was to provide an avenue to get him back to the farm. Part of it was the tradition of staying in the family.”
Another factor was to provide a better place for his kids to grow up, to develop a work ethic and the other kinds of things you learn on a farm. “Part of it was just an independence thing,” he says. “I wanted to work for myself – to be able to take care of myself no matter what is going on in the world around me.”
Though his sons chose not to take over the business, Rick has a clear vision for the future of his farm. This year he plans to transition the farm into a business where he is not as hands-on. He has hired a farm manager and plans to hire other managers. “We are going to transition to where I can sit on a stool when I’m eighty and just tell people what to do.”
In order to achieve that, the farm must produce enough income to hire those people and to provide opportunities to other young people to learn and get experience on an economically viable farm. Rick says, “I actually like writing paychecks because I feel like I’m creating something for other people just by farming.”
Another discouraging factor is the prodigious amount of work required in farming.
“I like farming when I have money to pay the bills,” Rick says. “When it’s tough, you’ve got to wonder why you didn’t stay with the other job. A lot of people want to give up their 9 to 5 job for eighteen hours farming. That doesn’t make sense. It has caused issues in my life just having to work all the time. That’s why we are moving the farm business in a different direction — so that I can have more of a balanced lifestyle.”
Farming is a profession that can easily fall victim to inertia. Rick’s tactic for making his farm economically viable and his life more balanced is to innovate, to shake things up, and to break patterns that would otherwise keep him and his farm stagnant.
“In the last five or six years, I’ve not been afraid to take things that work, blow them up, and do other things that I think should work better. I’m not stuck in the mode that I have to keep doing stuff because it’s ‘kind of’ working. We have thrown some stuff out that we used to do and have taken some risks. Some people, especially some that get into farming, aren’t flexible when it comes to change. But you have to be. You’re a businessman first; you’re a farmer second. If you’re a farmer first, you’re poor.”
To whom will ownership of the Rick’s land pass after him? The home farm will stay in agriculture either as a trust/non-profit or incorporated, and have a young couple manage it.
True to form, Rick is not entrusting the legacy of his farm to fate or chance. He is actively educating the next generation of young farmers. He has been a mentor with the Future Harvest CASA Beginner Farmer Training Program since 2012.
Whatever happens, trust that Rick will innovate and forge a promising new way forward.