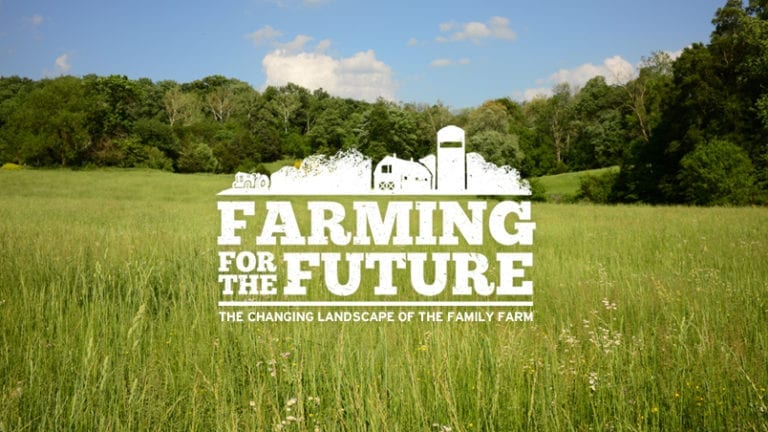 “The ultimate goal of farming is not the growing of crops, but the cultivation and perfection of human beings.”
― Masanobu Fukuoka,
The One-Straw Revolution
In this st

ory of a farm, we offer a picture of a “blended family.” In this case, it is a union of not just two, but three entities whose combined strengths and values hold great potential to enrich their own and many other lives.
The setting: Over the Mountain Farm, an 80-acre working farm ideally situated in a fertile valley between rolling hills in Washington County’s rural landscape.
Chris Zachariadis and wife Vicky Brown bought Over the Mountain Farm in 2008. Prior to their arrival, the farm was only producing hay for a herd of cattle also inhabiting the land. Chris and Vicky thought it was a shame to waste such nice soil and land. Chris had some experience with organic vegetables in California in the early 70s; his experiences, however, were not as a farmer, per se. For many years, Chris worked with farm workers and migrant workers to help them learn how to farm in their own right to become economically self-sufficient. Despite his lack of firsthand knowledge, Chris decided to give farming a go himself on his own farm with only the help of the other farm resident who managed the cattle.
“We failed miserably. We tried again the next year with a little bit more sophistication, and we failed again,” Chris said with a laugh. Chris said he likes to tell people that he pretends to farm.
There followed a third, more successful year with the assistance of an energetic young man with knowledge in organic agriculture and a love of entomology. But when that young man left the farm for graduate school, Chris exhausted himself with his efforts to market his produce to farmers markets and stores by himself. This led Chris to look toward other avenues to make the best use of this land.
Chris and Vicky then offered up the land as an educational opportunity for beginning farmers, similar to what he had done in California. You see, Chris and Vicky are much more than landowners looking for a hobby. Their deeply held values of caring for family, community, and environment lead them to create things that make conditions better. They are also the founders of the Lucy School, an arts-based school in Middletown, MD. In this case, they wanted to give young people and new farmers an opportunity to use the land and, in doing so, encourage wise stewardship of the land and environment.

Enter Conner Self as the farm intern. A resident of Myersville, Maryland, Conner did not come from a farming background. In fact, he was pursuing a degree in international relations from the University of San Diego. But he did not feel his studies were equipping him with practical skills to take abroad. Connor suspected he could gain such skills through agriculture, and he went to work on an organic farm in Thurmont for a summer. He liked his experience there and took classes on a teaching farm in San Diego as he finished his studies.
Conner saw hands-on farming experience as a path into international relations. “I got interested in the whole farming movement, especially small-scale, sustainable farming. I’ve always been interested in the environment and environmental politics. I feel like this is my way to do my part in terms of changing the farming system and being more sustainable in how we get our food. And, I love food!”
The next summer, Connor interned on Over the Mountain Farm and intended to come back this year again to run a CSA from the farm on his own. Chris recognized the path that Connor was heading down as one he had tried himself and an extremely difficult one.
Then, along came the Common Market. This past spring, the Common Market threw its hat into the farming ring by leasing ten acres from Over the Mountain Farm and hiring Connor as its full-time farmer.
This community-owned grocery store has always worked to build connections between people and their food. The opportunity with Over the Mountain Farm is a chance to make that connection stronger and to expand the scope of what we do.
On the property there is also a greenhouse for starting seeds, a hoop house for experimenting with winter crops, and a barn with packing and refrigeration space.
The land of Over the Mountain Farm is not certified organic at this time, but it is ripe for certification if that route is chosen. No chemical pesticides, herbicides, fungicides, or chemical fertilizers have been used on this farmland for at least ten years. All seeds planted were certified organic.
The Common Market is leasing the land as a small-scale experiment to explore growing our own produce and to see what else we can make of it.
This was a new undertaking for us, so this first year was mainly for learning how to grow, maintain, harvest, and sell on a small scale.
It is Chris’s, Connor’s, and the Co-op’s hope that the experiment will lead to the creation of a place where community-building, hands-on learning happens and beautiful things can grow.
About his ultimate vision for the farm, Chris said, “I believe in affording opportunities for people to get together to learn from each other, exchange ideas, and come up with things to develop and build. I think that is where the opportunity is. Now you have something more than just your store that will allow that kind of dimension.”